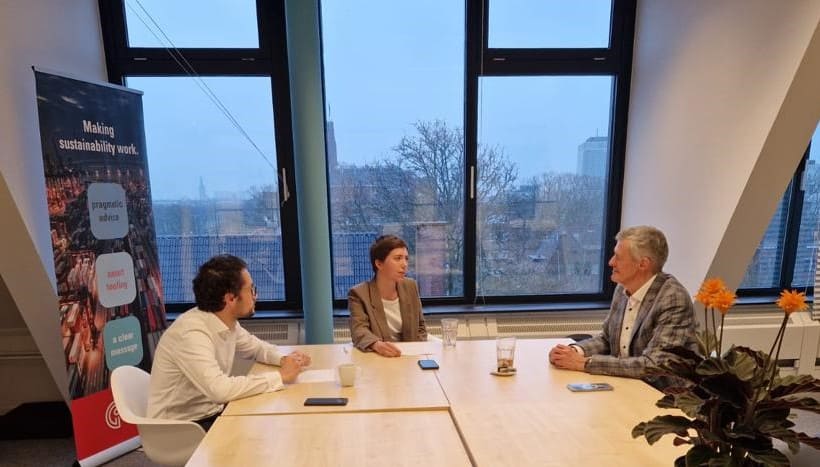 Leen Paape is a professor of Corporate Governance at the Nyenrode Business School. He is a renowned expert in corporate governance and has written several books and articles on the subject, as well as lecturing extensively around the world. He has won numerous awards for his research and teaching, and is a sought-after speaker on the topic. In this interview, we will discuss his views on the current state of corporate governance and reporting, his research, and his outlook on the future of the field.

You argue that corporate social duty of care should be regulated by law, why?

I gave 10 reasons why it should not be a question (watch the seminar here), among which the CSRD is a concrete interpretation of what the social duty of care should be. I myself am an advocate for open standards. So called higher-order standards. It gives companies a little more room to make their own trade-offs and prevents you from trying to prescribe too much detail where people could get lost in: it prevents the corporate social duty of care to become a checklist instead of a duty of care.

On the one hand all those details are useful because you know where you stand, but at the same time people can no longer give their own interpretation on how their role of corporate duty should look like. The practical usefulness can be lost in the process when all your attention is focused on meeting every criteria.

An open standard forces you to reflect on the things you do and need to do, and forces you to make choices based on where you have the most positive impact.

You already just mentioned the CSRD, can you elaborate more about how do you see the role of  said upcoming regulations on sustainability reporting, such as CSRD, but also CSDD and EU Taxonomy, in fulfilling the corporate social duty of care?

CSRD but also the CSDD will help mostly in fighting greenwashing because companies will be held truly accountable when their sustainable claims are false or unjustified. The American regulators has already tackled companies and fined them for telling what they considered to be false stories . You could consider Greenwashing to be making claims which are too good to be true, in my opinion Greenwashing can also be called fraudulent.

You can now make damage to the environment – so called collateral damage or negative externalities – without having to pay for it. Being held liable for this now is only natural and a small step that is long overdue.

Many companies have a so-called legitimate fear of being hung on their own standard (making promises and not keeping them) – However, it is not a legitimate fear. That there is a fear, fine, but it’s not legitimate and not justified. You can compare it to the saying: “A Pandora’s box need not to be feared”. Concern for companies being held legally liable in because they are, for example, not the most sustainable company in the world, is not legitimate. Because it is never about just performance. It’s about doing your best, reasonableness, and fairness. If your intent is good you don’t have to worry about that legal liability.

Besides the CSRD, there is also something known as the corporate governance code which has recently been updated, what is the added value of the code compared to the CSRD, if there is any?

The Code talks about long term value creation. However, it is not defined what long term is, and what value creation is. The code was revised again last December and shown to the people. In my opinion, what is in the code is outdated in light of the CSRD. They renew the code and extent it by talking about sustainable long term value creation – and the first problem already occurs: sustainable is not defined either. The Requirements in the CSRD go far beyond the code: What’s the point of that code anyway, to revise it, knowing it’s old news?

There is also frustration with how the code comes about. The code committee includes many interest groups from organizations, and they are always stonewalling. As soon as there are requirements that they don’t want for business they start to grumble. Such a code committee always has to compromise because there are multiple interests at the table, which is why the code will never go beyond the CSRD. It will always be a poor substitute for the ambition that should be there.

The added value is zero with the introduction of the CSRD and will not give any added value in the future in my opinion for reasons just mentioned.

What is your view of where responsibility on sustainability reporting should be governed within an organization?

In the ultimate sense, it is Chief’s business. It is a highest managerial responsibility. But there needs to be some change in the view of what and organization its goal should be. It is not only to create financial value, it’s to create value as a whole. Therefore, I am an advocate for the change from Chief Financial Officer to Chief Value Officer.

Because of emerging legislations, which we already touched upon, higher ups (C-level) are also starting to feel the need of sustainable business conduct, so it is also being invested higher and higher within the organization. All sustainability managers are very happy about this, because now they finally have encouragement companywide to improve their sustainability performance!

The first question that burns, what is a fair way? You have to discuss what is fair. It is quite extraordinary that we have managed to get 130 to 140 countries to agree on a minimum corporate tax percentage of 15. Is that fair? It is in some countries and not in others. That is why you have to talk to each other, in that sense it is a minimum, and it is mainly to prevent gaming and searching for the lowest pit where every cashflow will move towards. In that sense it is already a lot, in the Netherlands I think 15% is still not fair.

In its essence, Taxation is redistribution, it must be set at such a level that there is as little inequality as possible and wealth is distributed as fairly as possible. If you want to eliminate that inequality, you have to look not only at income inequality, but wealth inequality is often forgotten and is incredibly large. In particular, you have to start taxing wealth – do you do it on returns, on the wealth itself, through inheritance tax? We should debate this more.

I also believe that from a sustainability point of view, you should not only tax labor and assets, but also resources – in particular CO2 emissions. The Ex’Tax project is a great example of a proposal to put taxes on natural resources and pollution, and using the revenues to lower the tax burden on labor and increase (social) spending. That way you give companies an incentive to use their resources more efficiently in certain production processes, for example, and to become more circular. As a result, existing business models will be re-examined to see if they are still profitable for the future. Circularity, for example, must already be integrated at the business model level when resources and CO2 are taxable.

I think the quota is unfortunately necessary. But it needs some critical considerations. The top management is a first possible step. But on the Supervisory Board there are usually only 3 people, so that will be difficult. 30% is also too low, why not 50%? Half of this world is women, why can’t the top of the organization be a reflection to our population? At the end of the day: women are winning! Of students, there are many more women than men anyway and they also perform better.

In addition, equality on gender rules is too restricted, actually ethnicity and the whole identity should be diverse, at least through active measurement and adjustment in the top of the organization.

I must say that I do always find it difficult to express myself on this topic. The other day I had to moderate a session on inclusiveness and diversity by women inc., about the top women in business. My first question to all the women was: why are you asking me to moderate? I am a 66-year-old white male, anything but a person who makes diversity higher. Therefore, I always feel burdened to have a very strong opinion and express it at the front-line. I come from a different generation in which I did benefit from less diversity. I do hope that the younger generation will bring even more change and movement on the topic of diversity and inclusiveness.

The Future of Corporate Reporting 2023

We want to thank Leen Paape for this interview, where he provided valuable insights into corporate and sustainability reporting. He highlighted the crucial role of statutory duty of care in ensuring that business is managed properly and ethically, and that organizations remain accountable to their stakeholders and beyond. His words have been a great source of knowledge and inspiration, and we are confident that his insights will serve to further inform the public discourse on corporate and sustainability reporting during the 10th edition of The Future of Corporate Reporting.

Would be great to get in touch.

More information on themes like sustainability, ESG reporting and how to leverage technology? Wesley will give you the ins and outs.

We use cookies on our website to give you the most relevant experience by remembering your preferences and repeat visits. By clicking “Accept All”, you consent to the use of ALL the cookies. However, you may visit "Cookie Settings" to provide a controlled consent.
Cookie SettingsAccept All
Manage consent

This website uses cookies to improve your experience while you navigate through the website. Out of these, the cookies that are categorized as necessary are stored on your browser as they are essential for the working of basic functionalities of the website. We also use third-party cookies that help us analyze and understand how you use this website. These cookies will be stored in your browser only with your consent. You also have the option to opt-out of these cookies. But opting out of some of these cookies may affect your browsing experience.
Necessary Always Enabled
Necessary cookies are absolutely essential for the website to function properly. These cookies ensure basic functionalities and security features of the website, anonymously.
Functional
Functional cookies help to perform certain functionalities like sharing the content of the website on social media platforms, collect feedbacks, and other third-party features.
Performance
Performance cookies are used to understand and analyze the key performance indexes of the website which helps in delivering a better user experience for the visitors.
Analytics
Analytical cookies are used to understand how visitors interact with the website. These cookies help provide information on metrics the number of visitors, bounce rate, traffic source, etc.
Advertisement
Advertisement cookies are used to provide visitors with relevant ads and marketing campaigns. These cookies track visitors across websites and collect information to provide customized ads.
Others
Other uncategorized cookies are those that are being analyzed and have not been classified into a category as yet.
SAVE & ACCEPT